It was a beautiful day for a Deering Estate Engagement Session in Miami, and I am so excited to be the Miami Wedding Photographer to do it!  But, before we can even get into the details..  let me first say how wonderful both Lindsey and Chris are.  First of all, I met them through another clients wedding I shot a few years ago at the Westin Colonnade and when it was time for them to start planing their own wedding.. they remembered me, and came to meet with me.  From the moment I met with Lindsey, Chris and her mom I knew how much fun, and how easy going everything would be….and… I was right!

The first thing we needed to do, is plan out the engagement session (which is always a ton of fun, and allows us to work together before the big day.).  The ideas started back and forth, and we talked about maybe starting things off kinda like a movie, in the sense that each of them are “introduced” to one another (well, for a few frames at least) vs. the standard..  just always posing together.

I feel like I have gotten to a point with photography, where doing the same thing over, and over again starts to wear down on the creative energy.

. so, I am constantly trying to encourage new things, ideas, locations, etc.  Lindsey and Chris were excited too with the ideas!

So, while this ended up being a very nice Deering Estate Engagement Session it first started off in Coconut Grove at the marina.  This is where we decided to introduce the “characters” and warm up with some images.  I had this vision in my head that Lindsey was out on the balcony enjoying some wine, and then notices Chris off in the distance working on his boat.  Perhaps she has seen him before, perhaps this was the first time.. in either case she was really interested to finally make the approach to him, and walk over to start the interaction.  From there, the romantic traction is formed and the images ramp up quickly to showcase how they in fact feel about each other in real life.

This was in fact a session where, showcasing the images in a blog post (such as this one), or in a magazine / book / album etc, would make the most sense so that you can see the “story” unfold from one shot to the next.  I really enjoyed playing with this concept, and am VERY excited (and have already started planning) some more elaborate sessions that involve some kind of story to them.  I think this is a direction I want to go, and in the end will make for some truly impactful (and meaningful) content that is beyond that of just “stand here, and smile” 😉

As “Icing on the Cake” I have provided a pretty complete recap of this session with my behind the scenes video!  This is really exciting as YOU the reader can tag along for the shoot itself!  Grab a glass of wine, sit back without distractions and really watch as I work.  You will get a good feel on how the sessions unfold, whats involved (well a sense anyway), and my exclusive commentary while I am working live.  There is no better way to “experience” what we do then this!  Also, I encourage you to subscribe to my YouTube channel to not only support my efforts, but to be notified of all future videos that are to come!

So here we are with Lindsey way, way far away looking out and sees Chris out on the dock below working on his boat.  Obviously images like this on their own would be a little silly..  however, when you put them together side by side, and build them into the story it all makes sense. 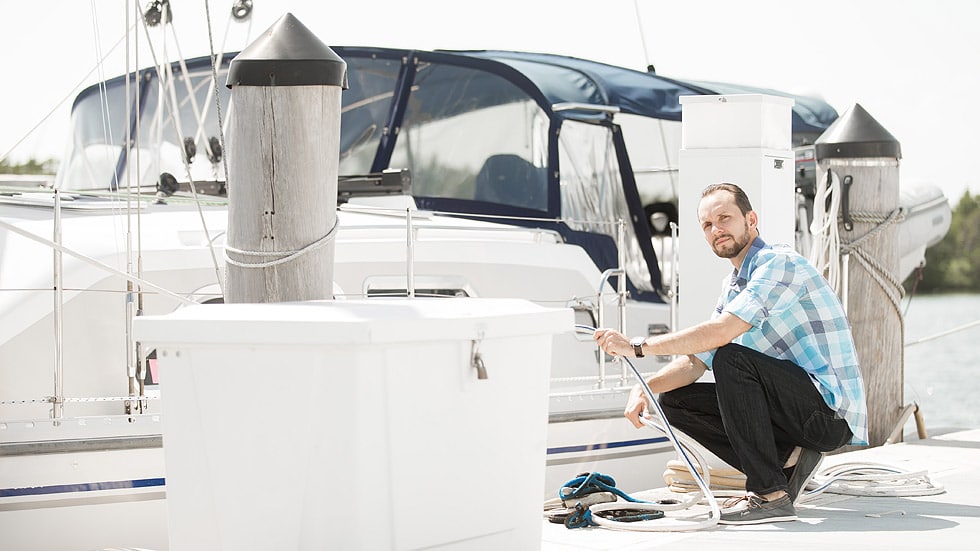 For this shot, (above) it was all about showing that Chris saw her coming from a far and at this point was not even sure who it was, or what they wanted. 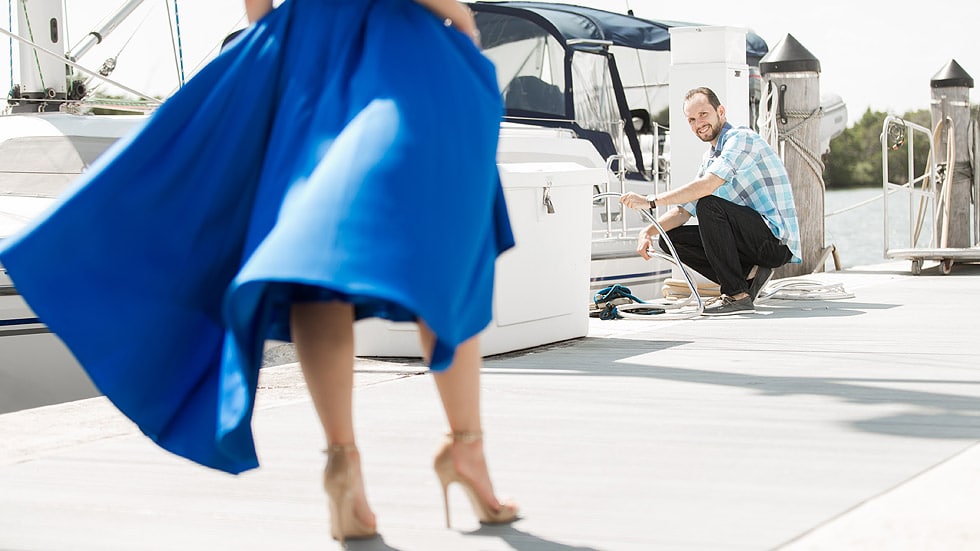 Here I introduced Lindsey with Chris, and Chris’s reaction says it all.  I wanted to shoot it this way so that it felt a bit more “cinematic”. 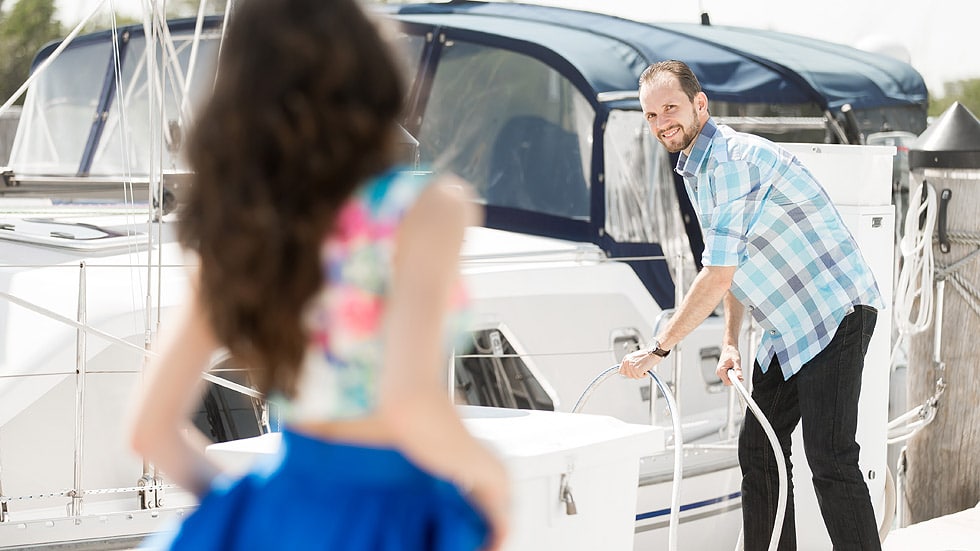 Even here, I tried to retain all the details.. as she got closer.. I had Chris stand.. and then went for this shot, which mixes well with the one just above it.. 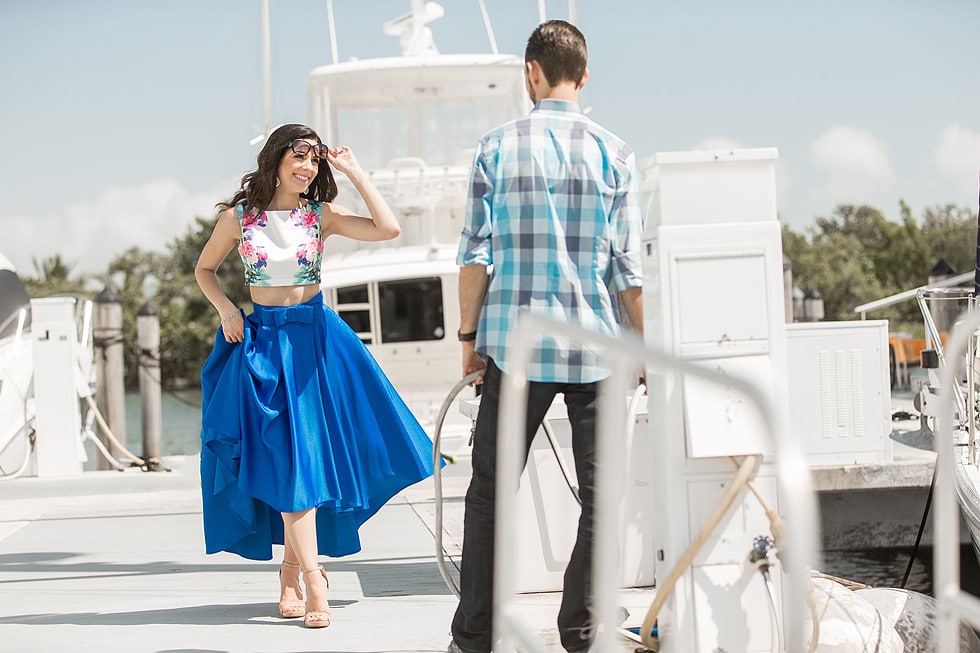 Finally, just like in a movie you would have another camera position to capture another vantage point.  Here I wanted to show Lindsey’s excitement, and what was likely some nerves LOL.  Notice the “pose” which, although is a pose does not really look like it.  I wanted her to appear in motion, walking over to Chris. 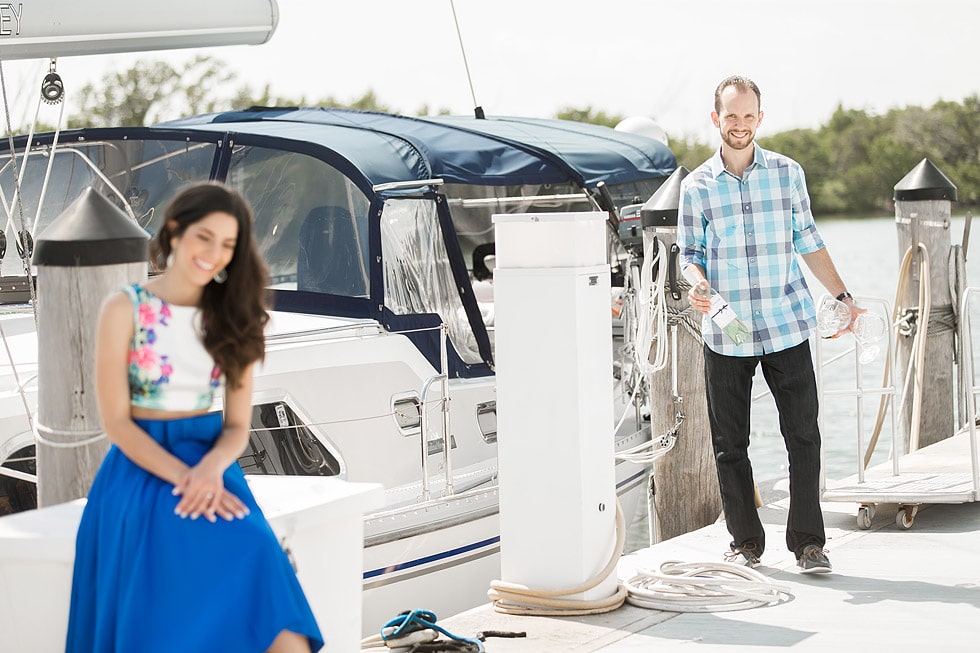 So, like any man with a boat and some sense he has some wine to offer his new guest, while they talk and get to know each other.  I mean, this would be an incredible first interaction! 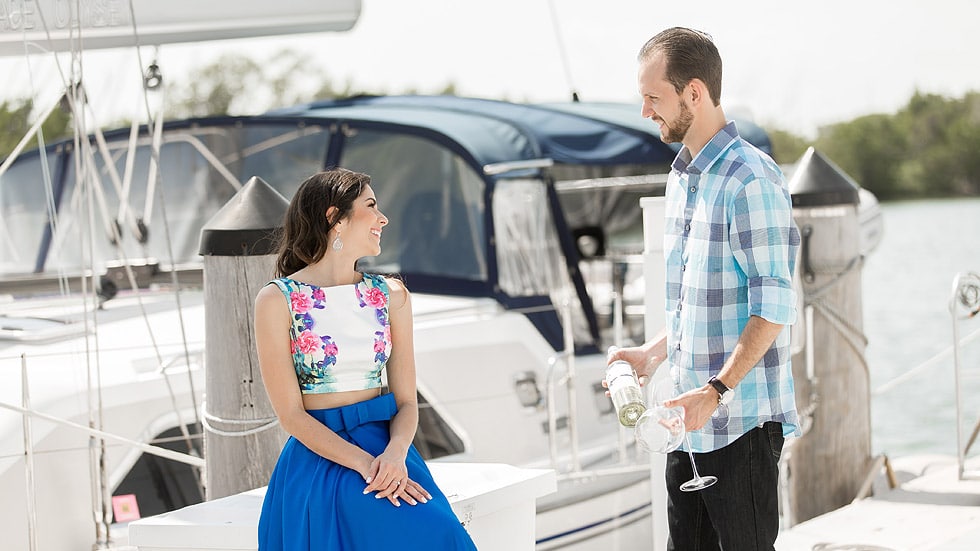 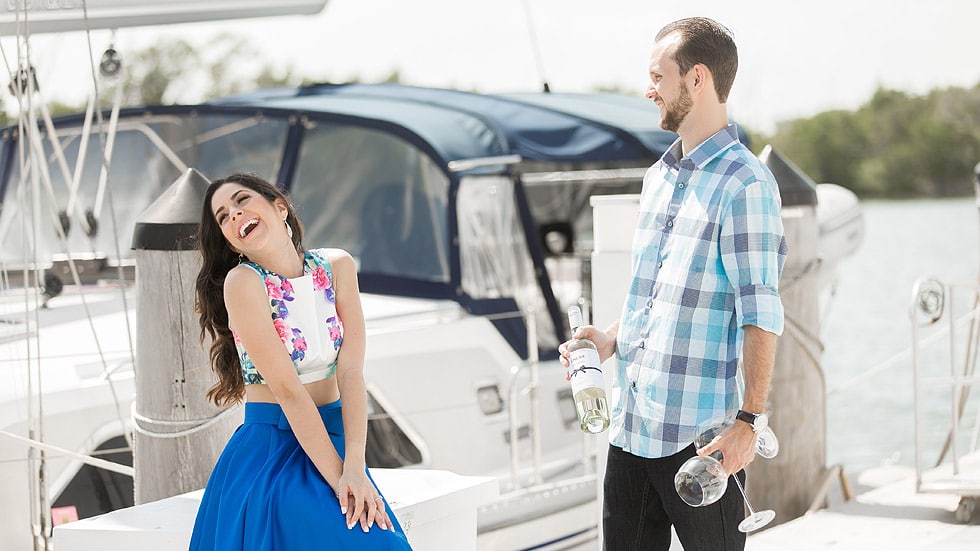 Here (above) showing the laughter, and looking off camera was a sure way to show that Lindsey was flattered by something Chris had said.  This is so nice, because it starts to look less, and less like an “engagement session” and more like a lifestyle shoot where it seems very little direction is being given (when in fact there is). 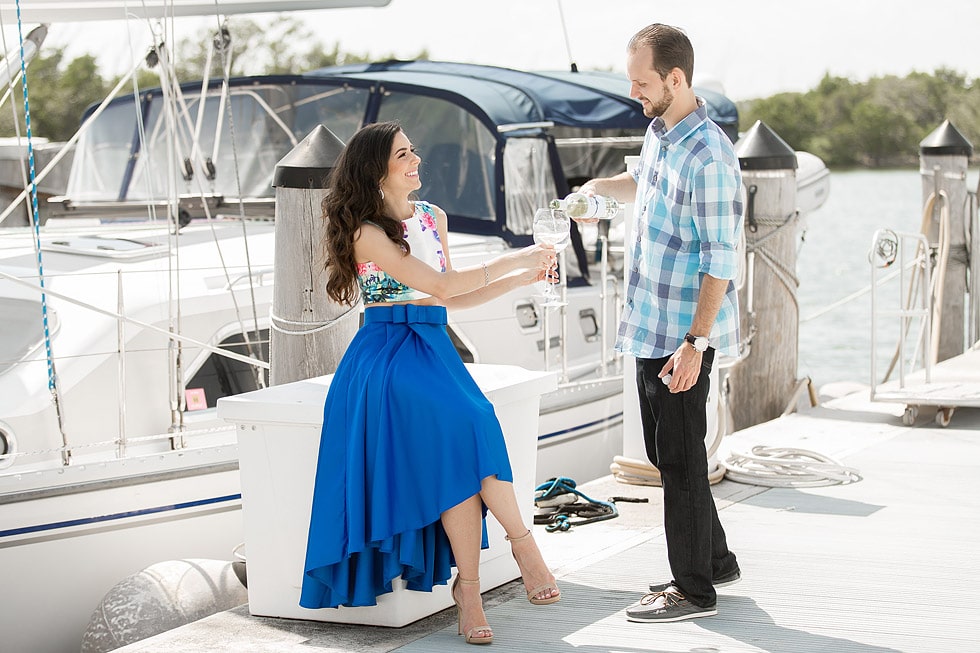 Notice here, the subtle change in the distance in which I have Chris standing to Lindsey.  At first (above) he is back a bit, and begins to pour the wine.  Then, slowly moves closer to her (below).  This is all part of him showing more, and more interest in her. 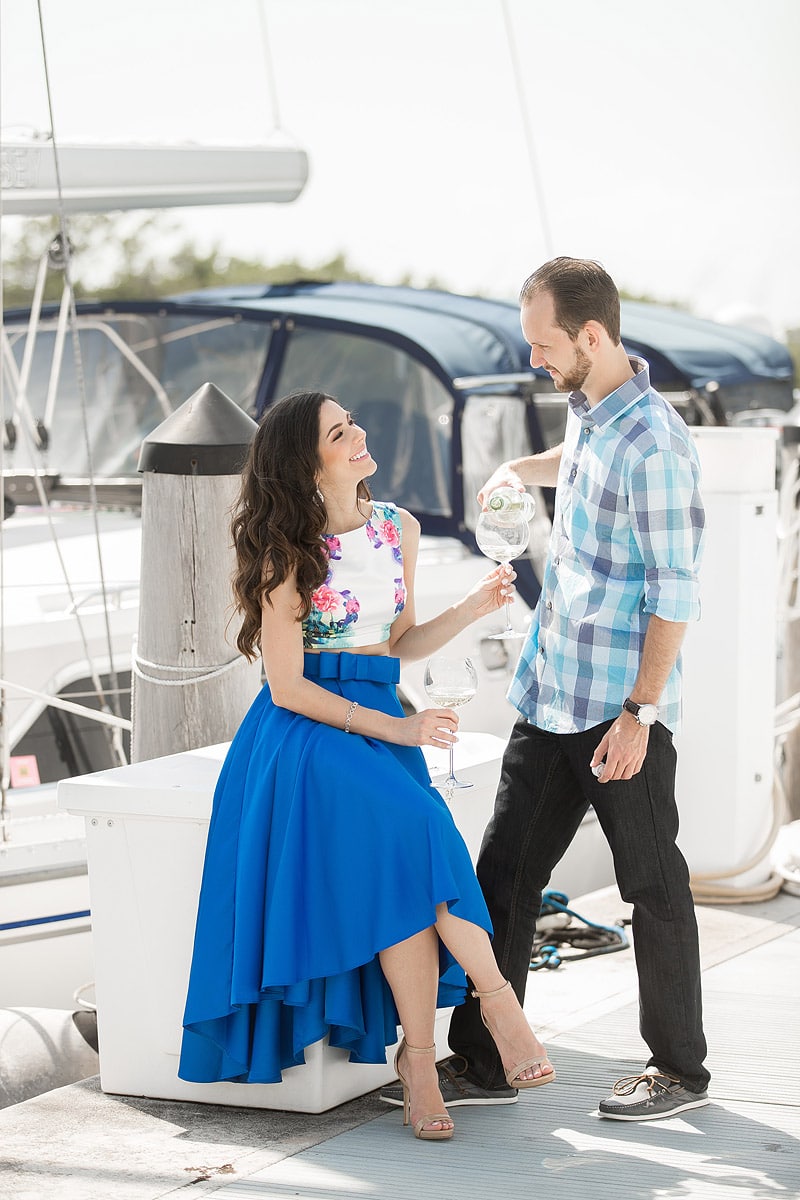 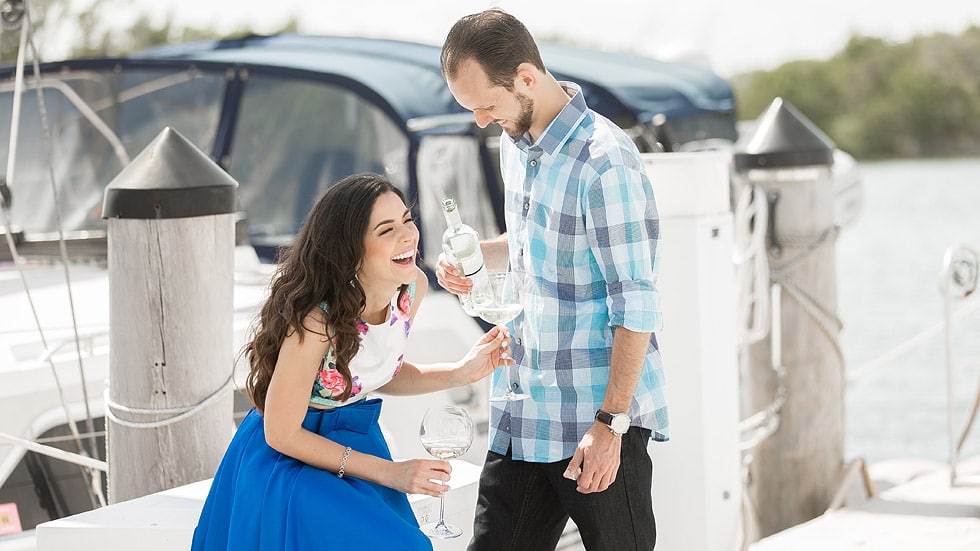 It was so important to showcase the “interaction” in this set.  You will have to watch the behind the scenes video to see how I got this shot, LOL.. but it was perfect! 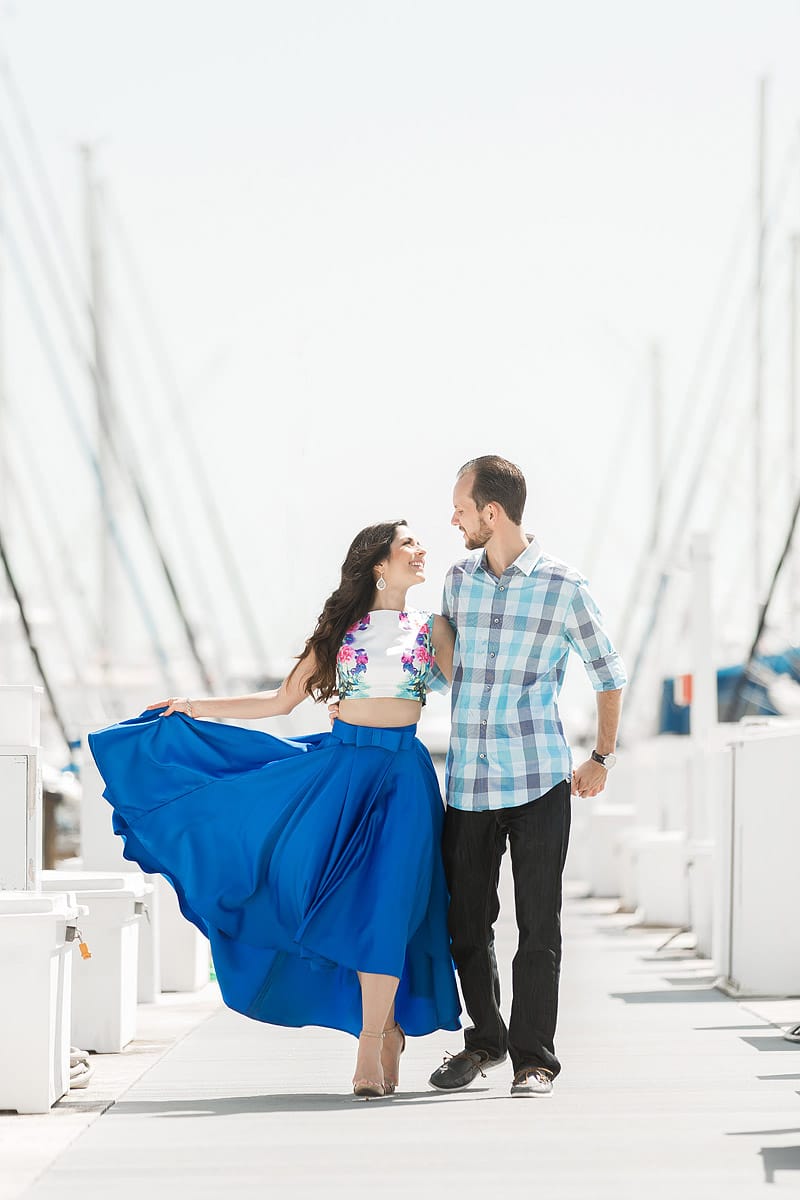 Shooting on the dock posed some challenges as it relates to composition (at least for my standards).  What I mean, is that camera left (behind her dress) there was an orange structure that was going to be in the frame.  It was large, and not something I wanted to deal with..  so..  I decided to have her hold her dress out, and “hide” it 🙂  Came out nice, and looks very “in the moment”. 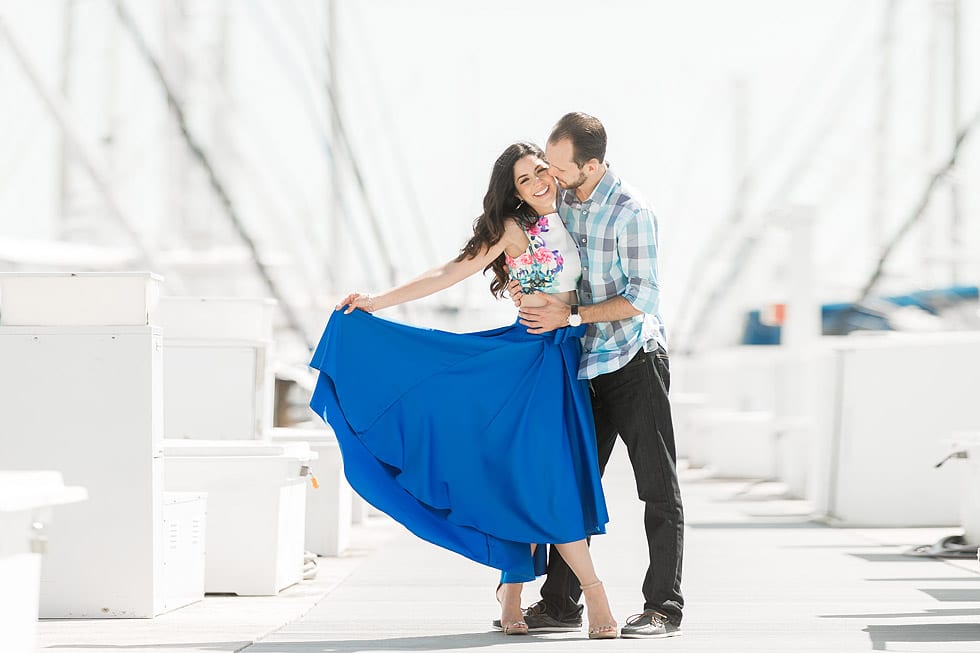 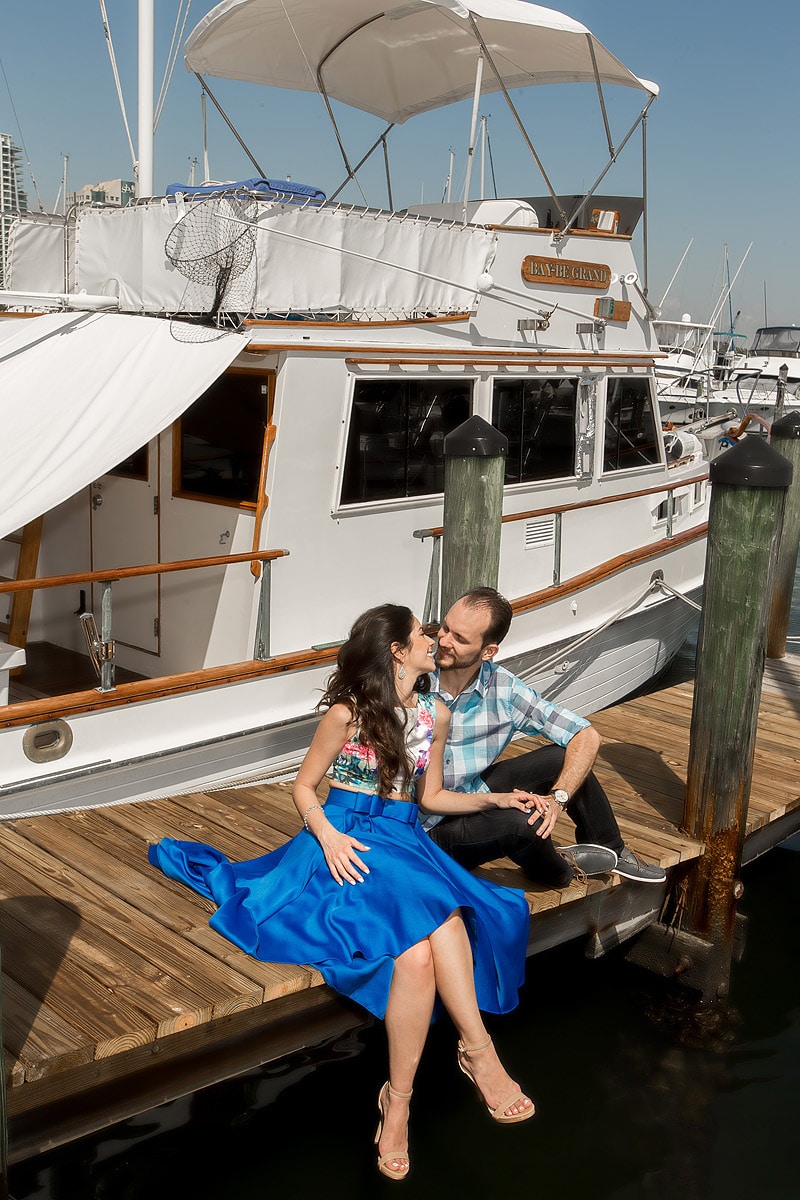 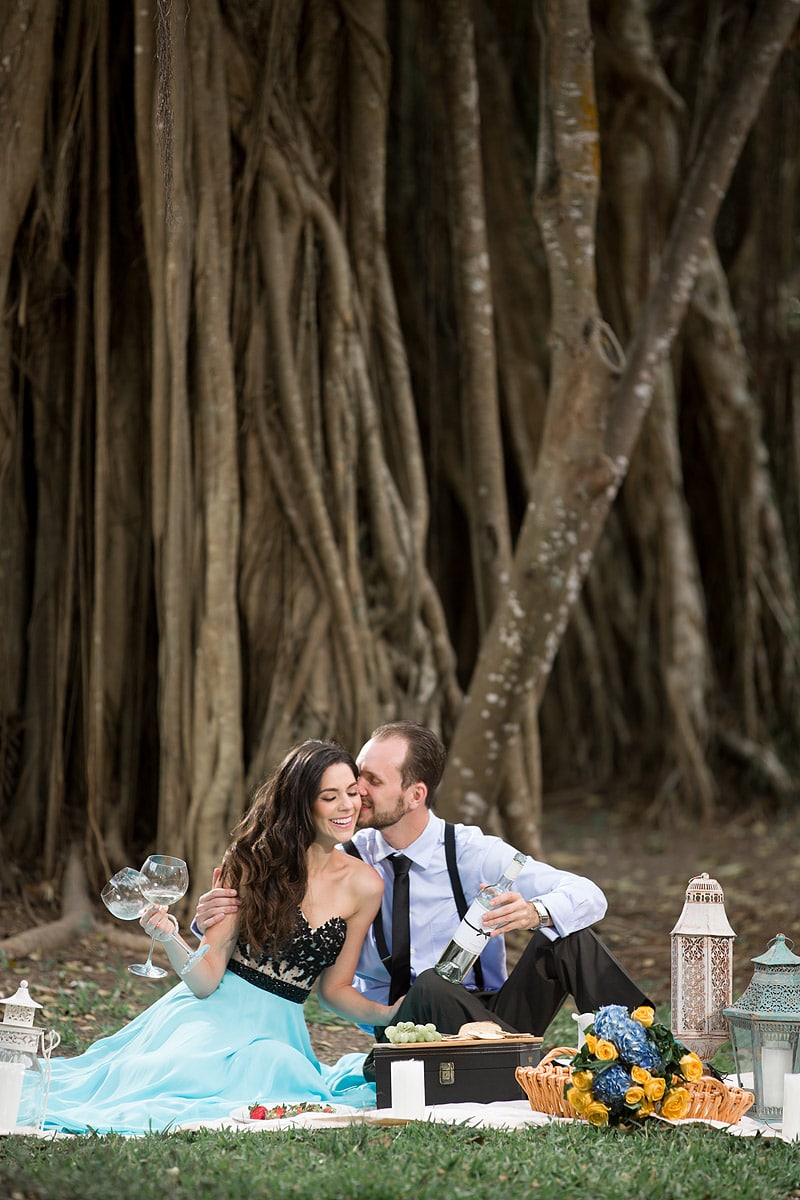 Now we finally get to the Deering Estate Engagement Session!  I love the Deering Estate, and as I mentioned in the video it has about anything a photographer could ever want.  In this case, we wanted to create this “picnic theme”..  and in many ways, this was a way for Lindsey to showcase some of her style. 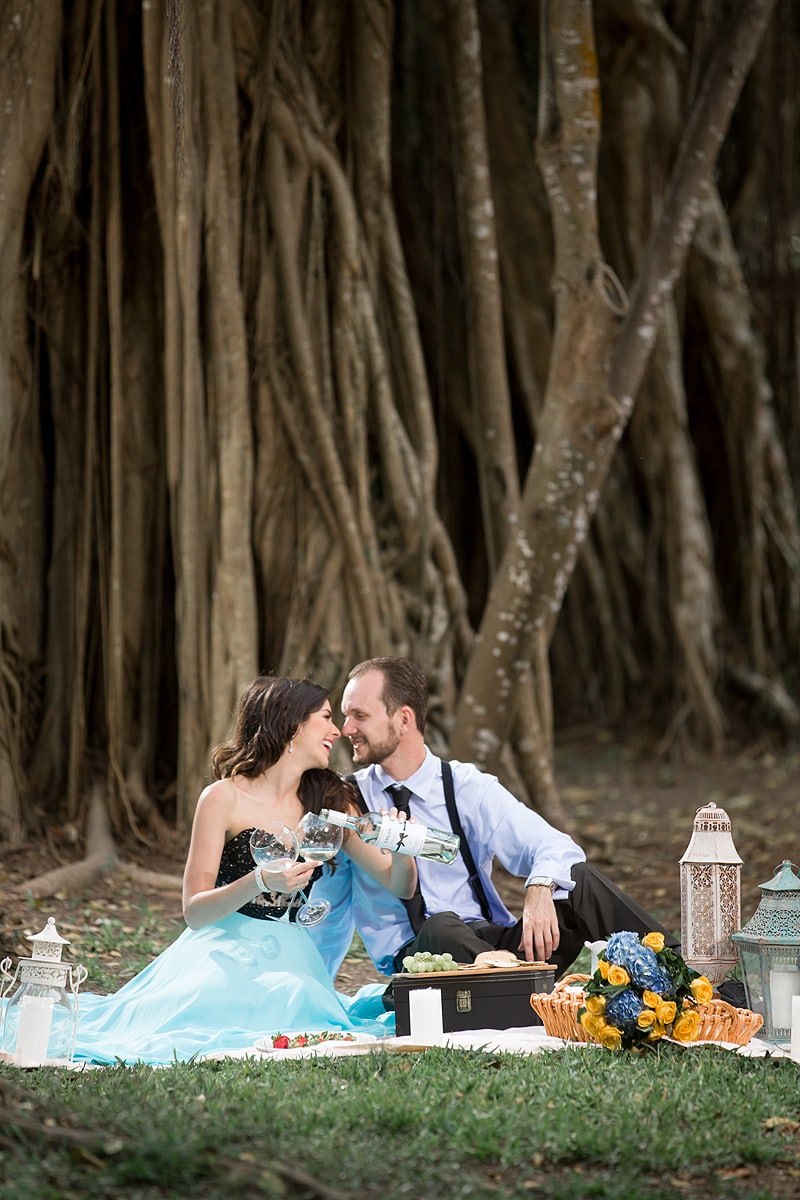 Its almost as if Lindsey is now in control, and showing her new friend a bit of what she enjoys and almost like a joke is now pouring Chris the wine..  as she thought he was very smooth before at the boat. 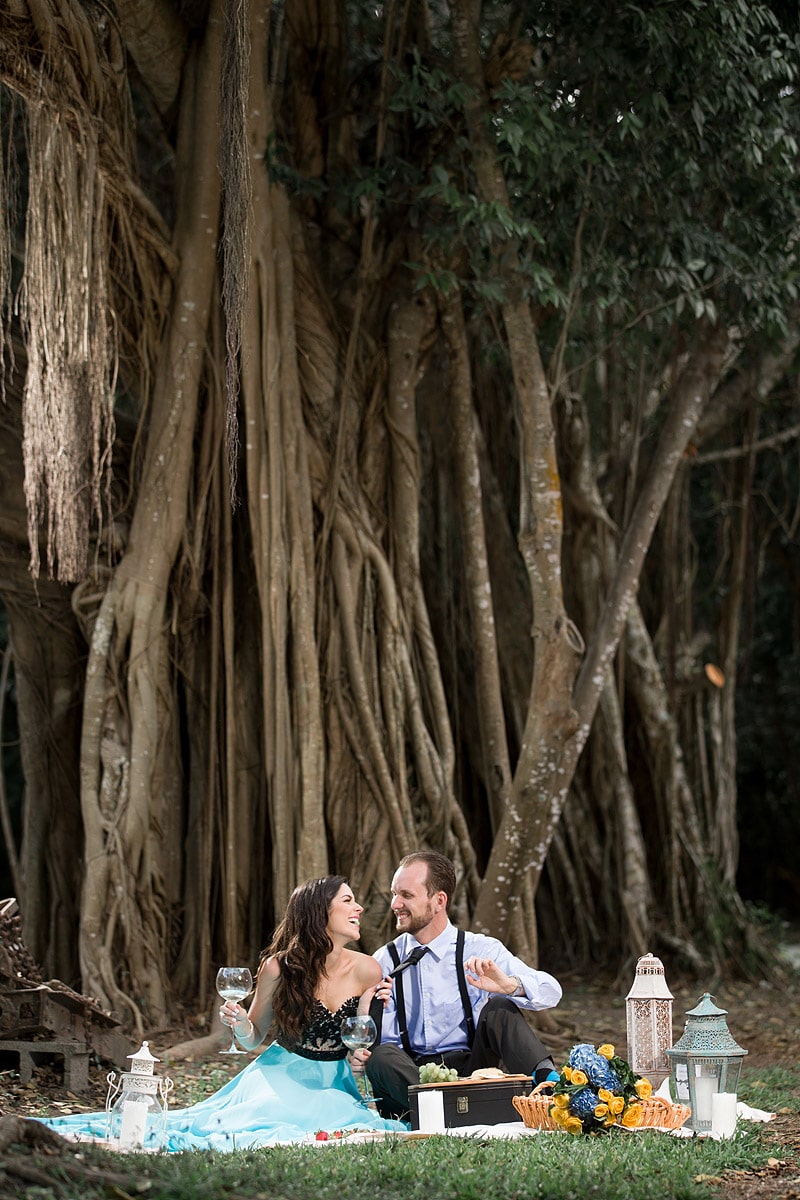 They may actually have been a little drunk at this point.  LOL.  So much fun! 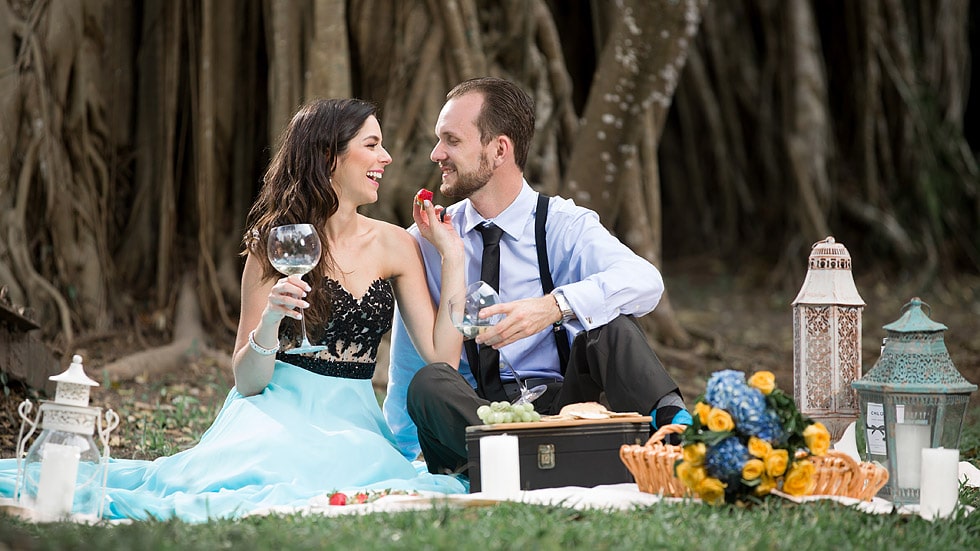 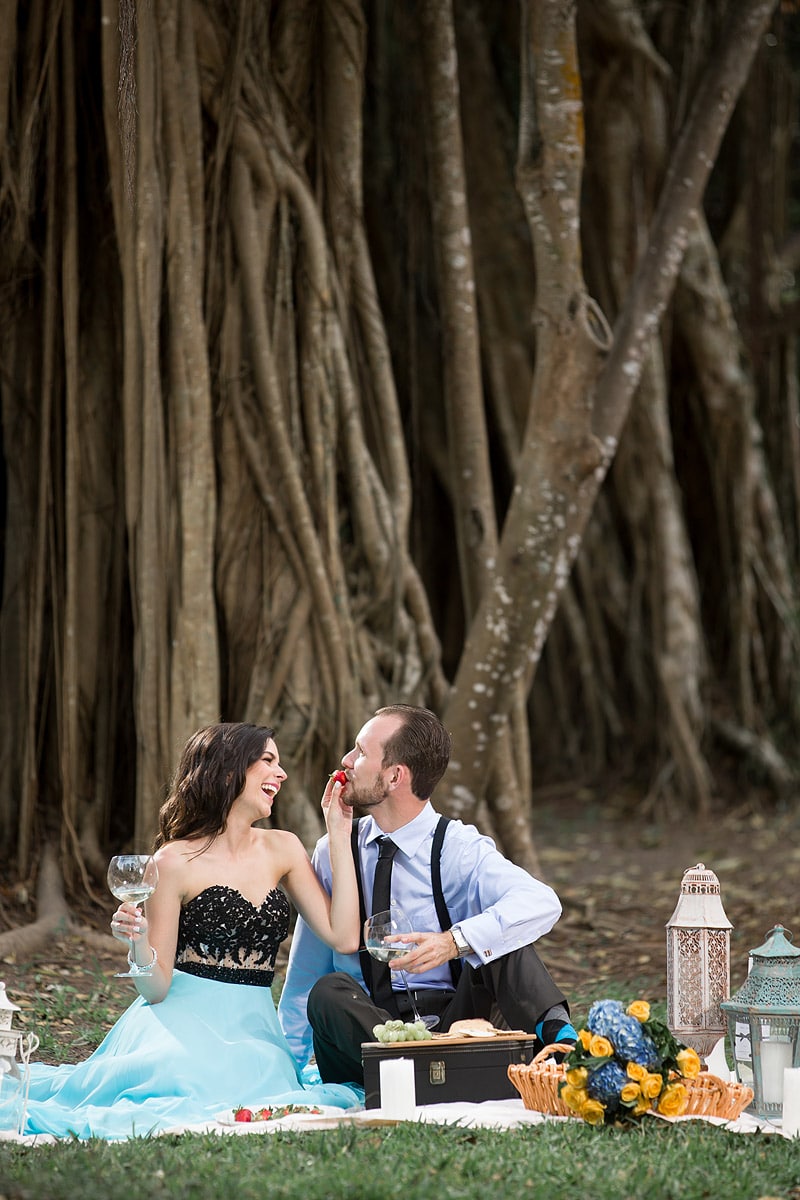 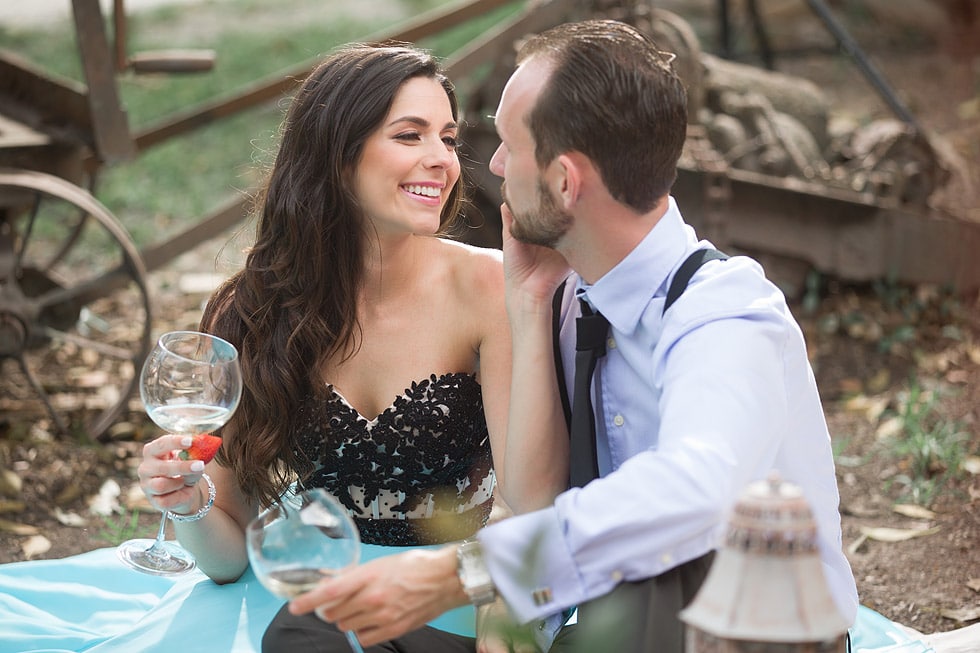 While I had my main composition, I still needed to get some other shots that were close up, and that further told the story.  Thinking in a “movie making” way, some shots like this are nice and shows the passion between them.

Small details such as this image (above) of Chris.  I instructed him to “look at her lips”, and I caught him with his glass doing just that.  This really shows that he is thinking about kissing her, and is working up to that. 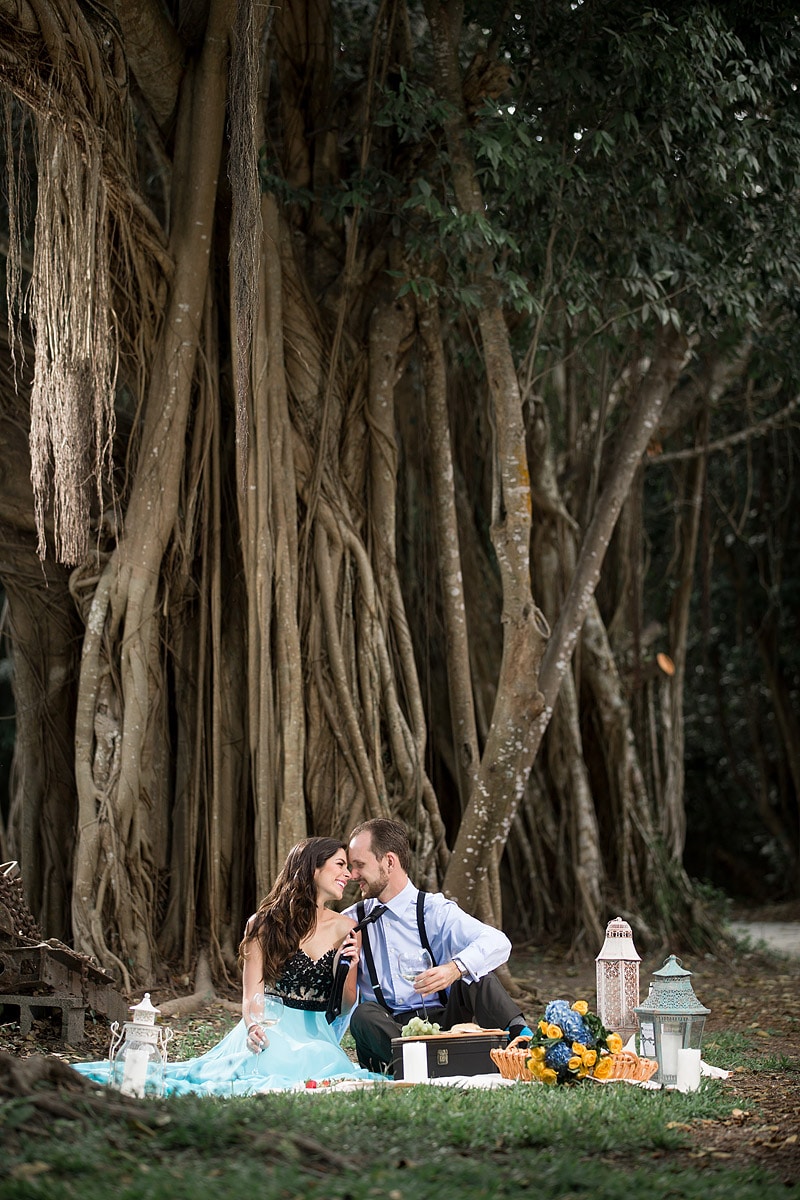 Lindsey notices his intentions, and then brings him in closer..  Very cute too with tugging on the tie.. touching heads. 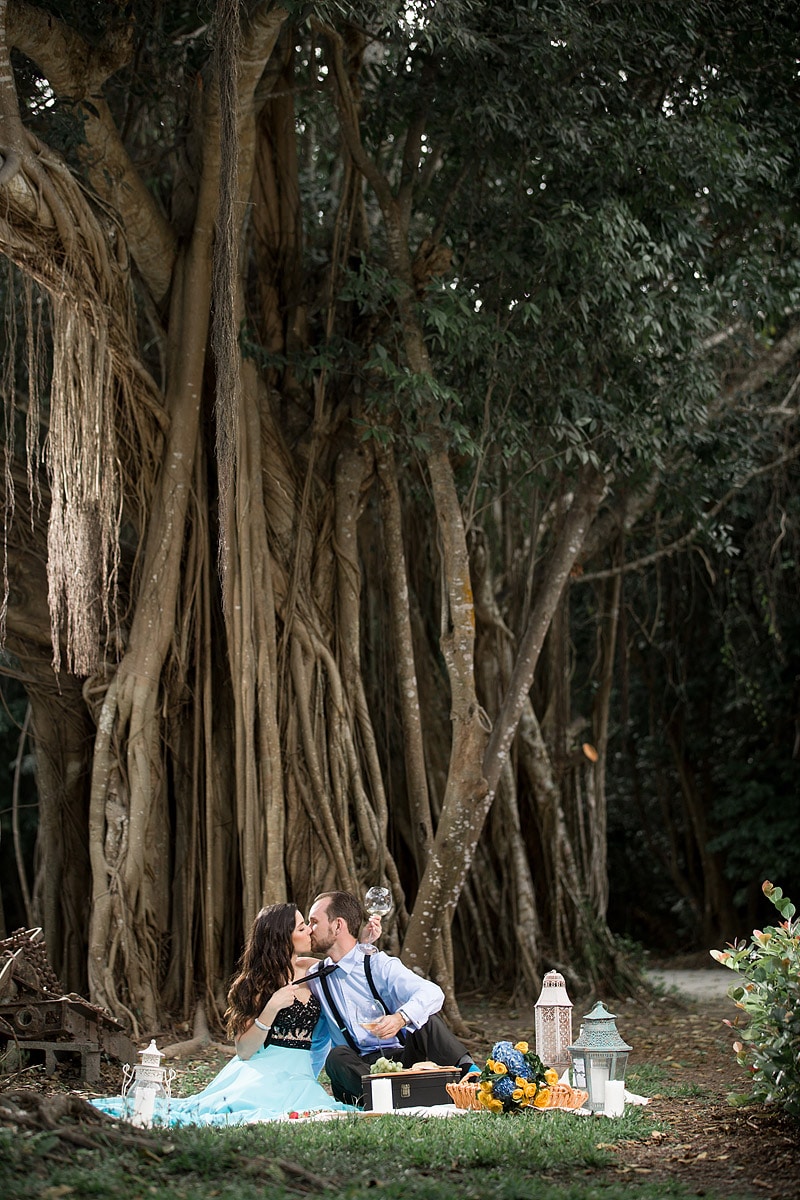 Enough was enough, and the kiss happens.  No laughing this time, no putting down the glasses, just an impulsive moment of passion. 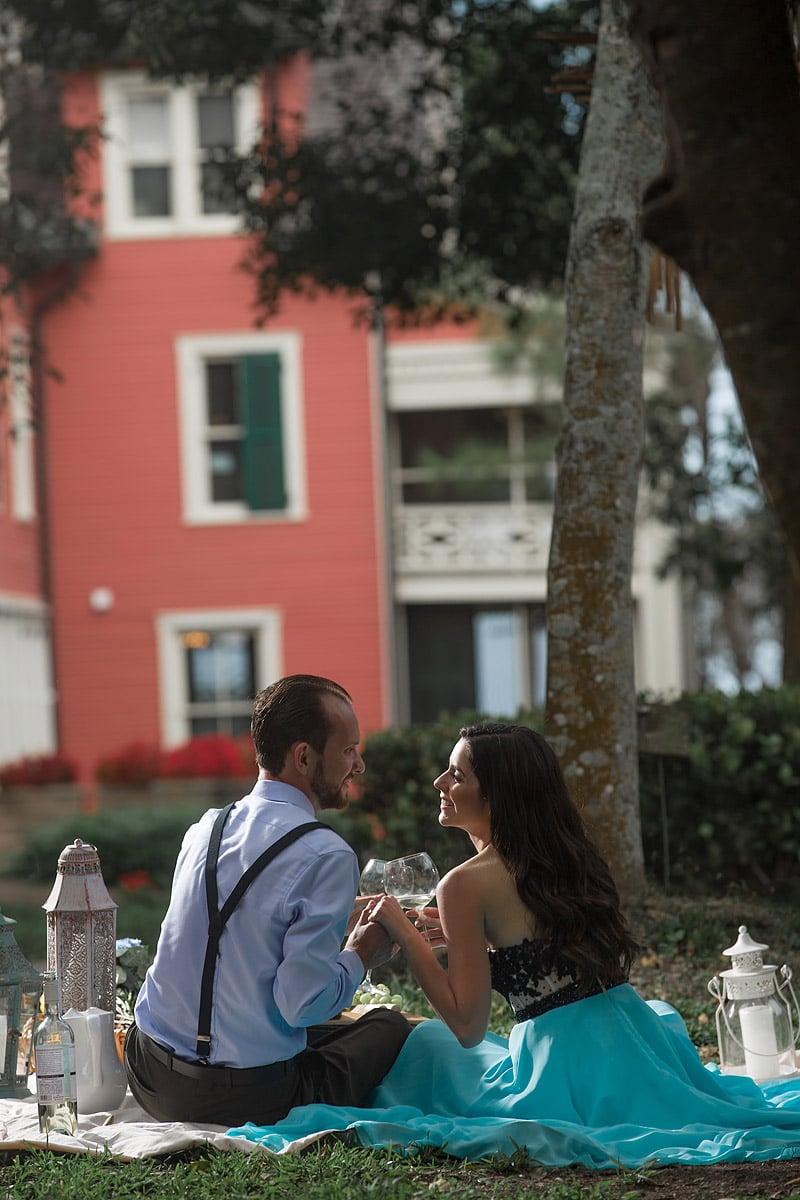 This was a nice vantage point as well (above).  By turning off my main studio light I was able to create more “drama” in the shot, and further showcase the location a bit more.  The direction lighting created texture, dimension, and mood. 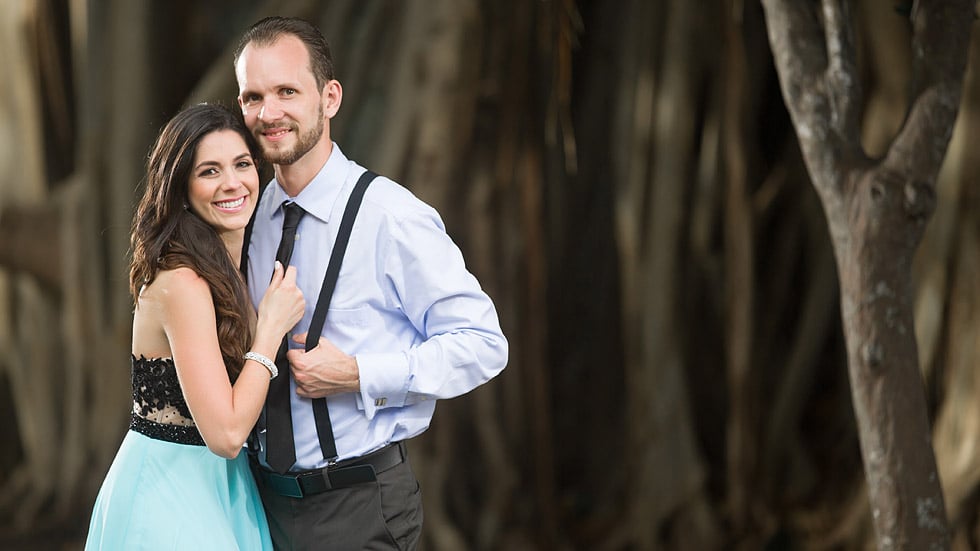 The above, and next two images you could say are more from what you would expect from a “normal” session.  Nice, solid, up close shots of them.  Beautiful lighting, and wonderful non distracting background. 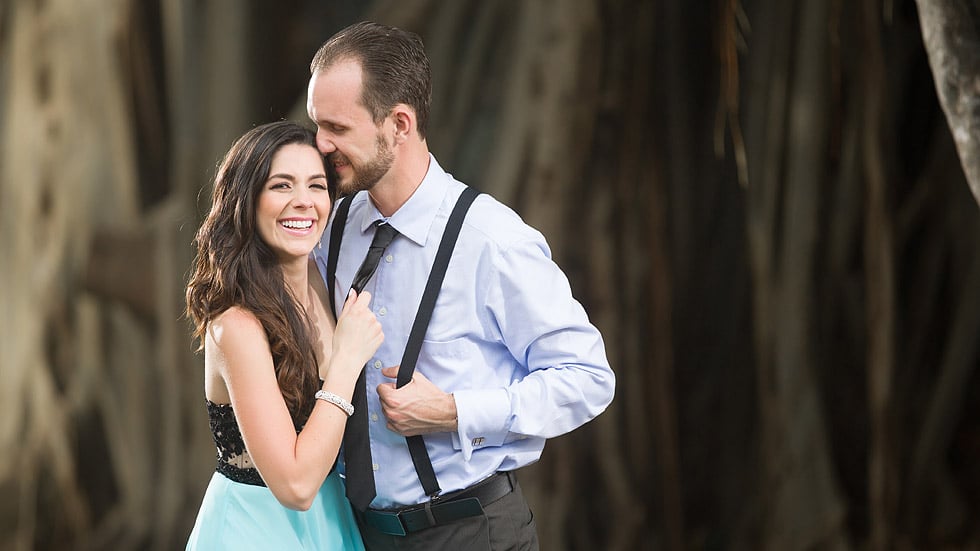 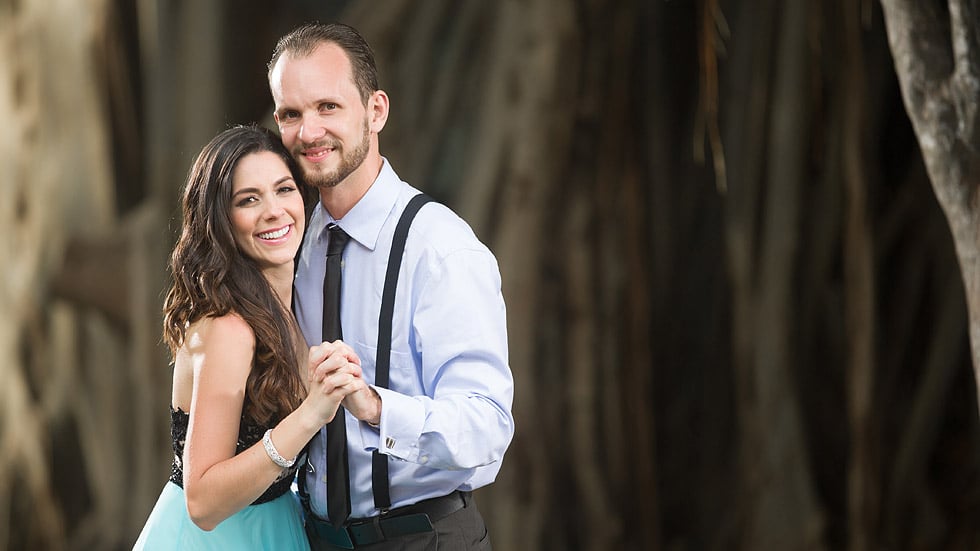 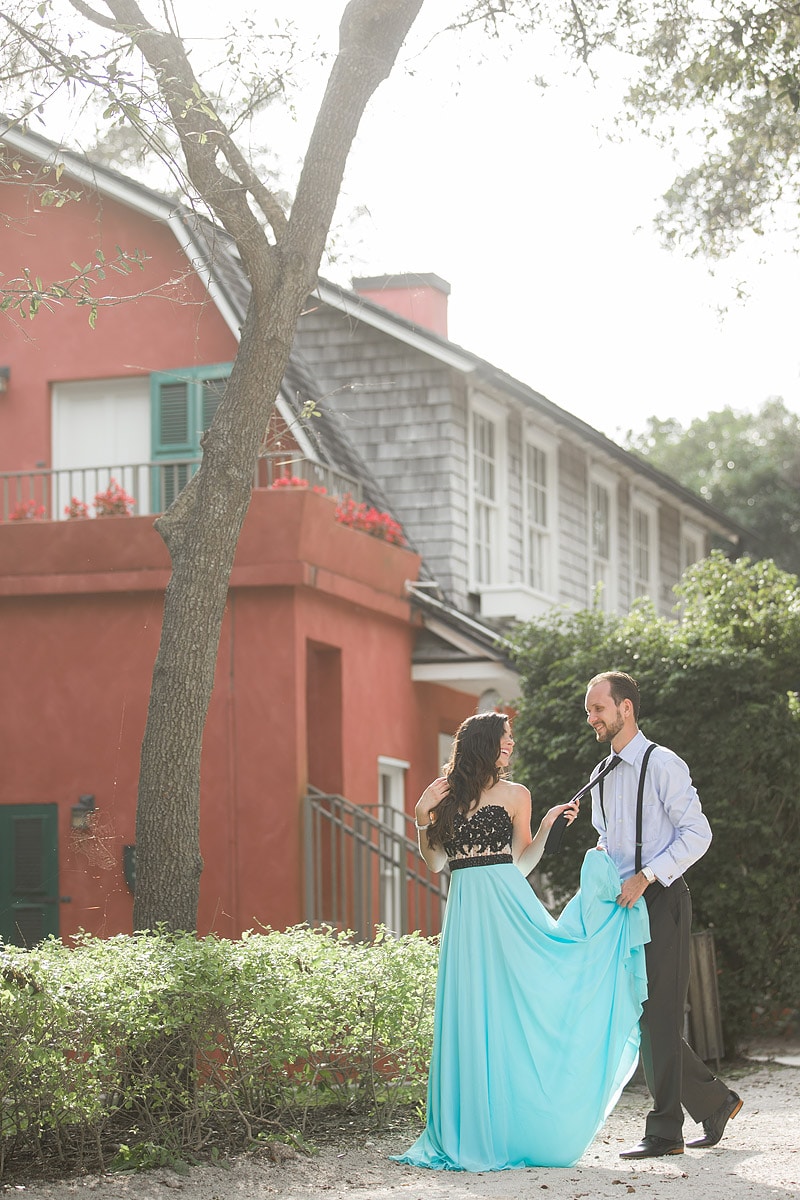 After a bit I noticed the wonderful natural light coming in over the building, and HAD to take advantage! Here I took them, and “set the stage” for some styled shots. 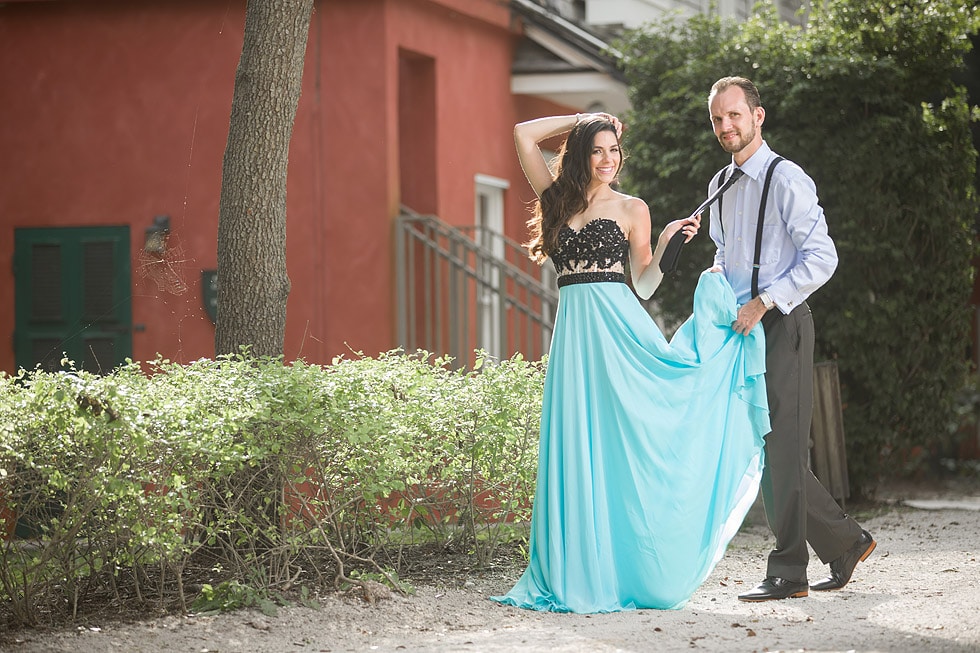 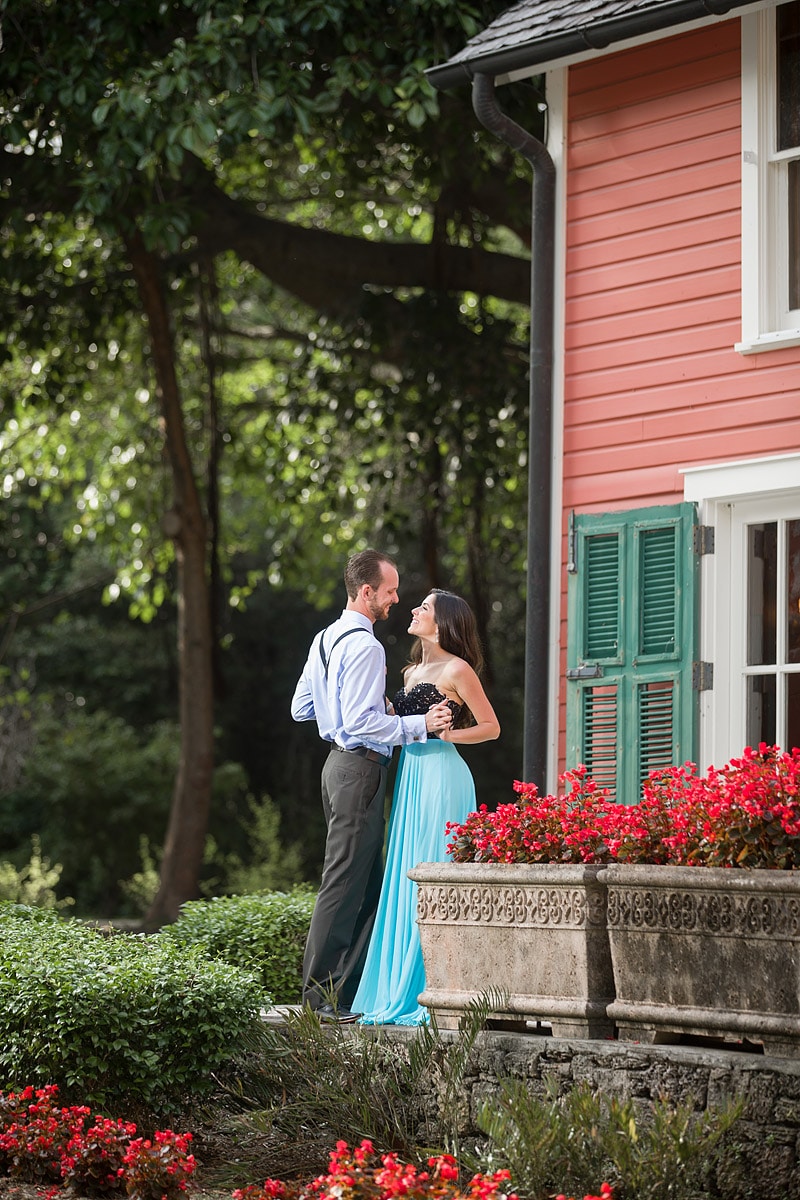 Playing with a little foreground here, and playing off the red in the building. 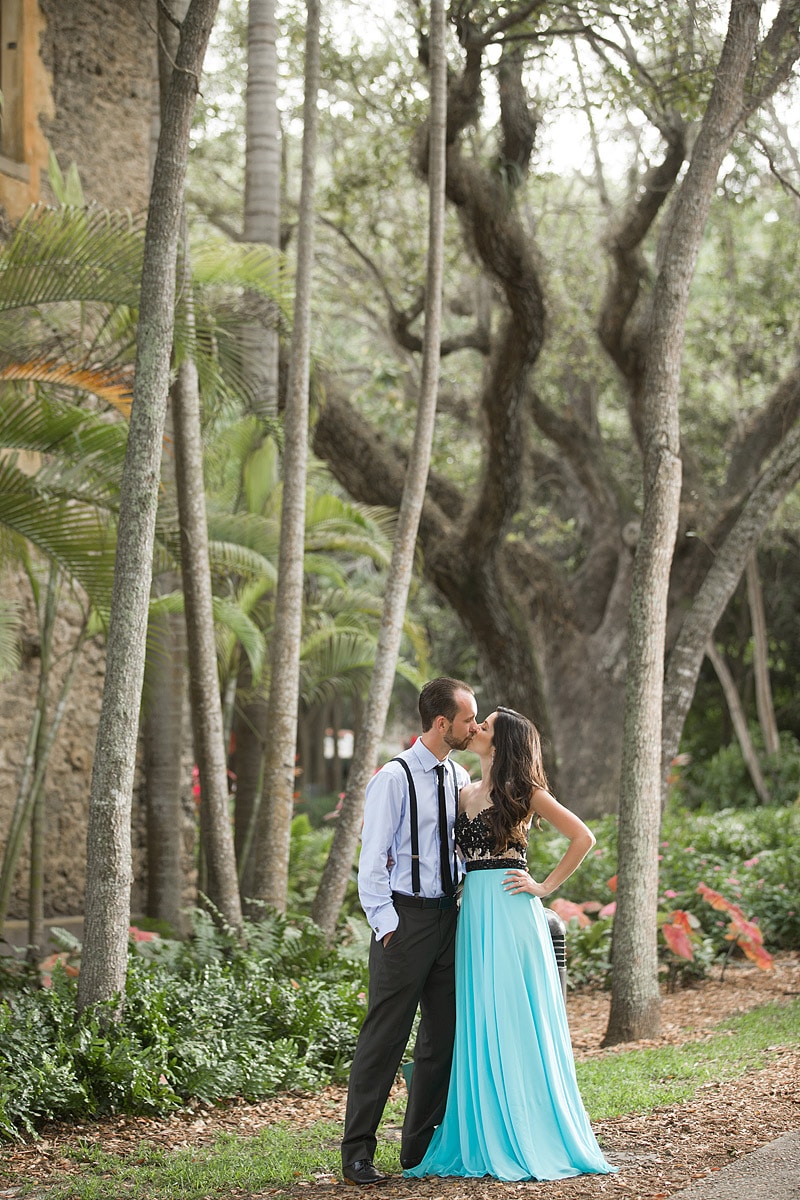 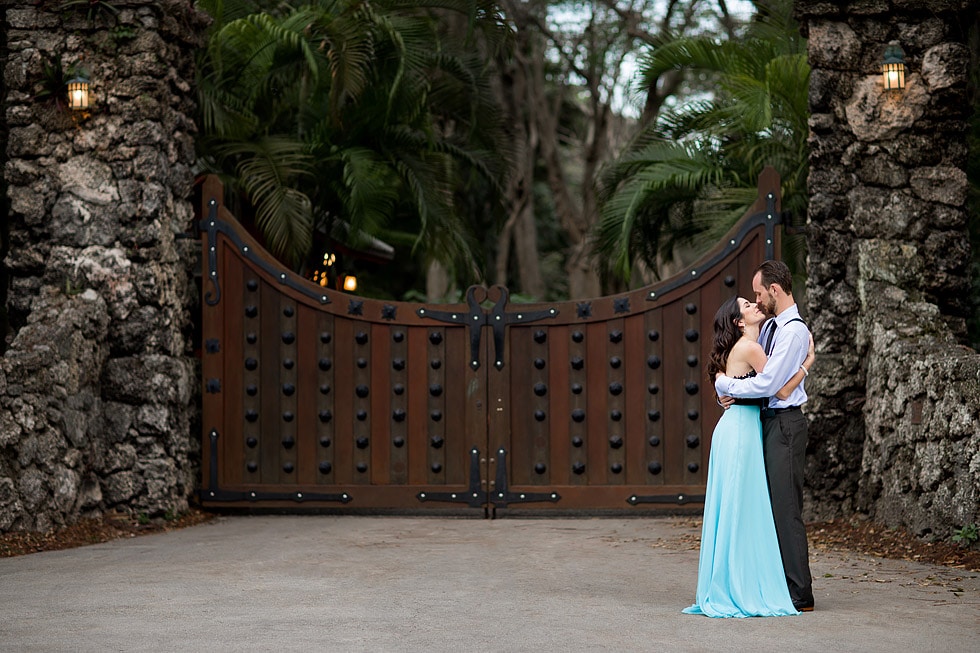 The outside gate was so beautiful!  Just a nice, soft all natural pose to wrap things up with.

Lindsey, Chris.. Thank you so much for this incredible adventure and to allow me to tell your story!  I am SO excited for your wedding in a few weeks!

Scroll back to top